Police Brutality - you don't have to stand for it!

WARNING, GRAPHIC VIDEO: South African police drag Mozambican man from back of police car; man is later found dead Onlookers shouted at police that they were being videotaped as officers allegedly tied Mido Macia, 27, to the back of their vehicle and dragged him along the pavement. Macia was later found dead in a police cell in the Daveyton township

JOHANNESBURG — His hands are tied to the rear of a van while his body lay behind it, on the ground. The van speeds off, dragging the slender taxi driver along the pavement as a crowd of onlookers shouts in dismay and at least one videotapes the scene. The man is later found dead.

It’s a gut-wrenching video, made all the more disturbing by the fact that the men who abused the Mozambican man were uniformed South African police officers and the van was a marked police vehicle.

Some of those in the crowd who watched the scene unfold in a township east of Johannesburg shouted at the police and warned that it was being videotaped. The police did not seem at all concerned as they tied Mido Macia, a 27-year-old from neighboring Mozambique, to the back of a police vehicle, his hands behind his head. At least three policemen participated in the incident. Macia was found dead in a police cell late Tuesday in the Daveyton township east of Johannesburg. 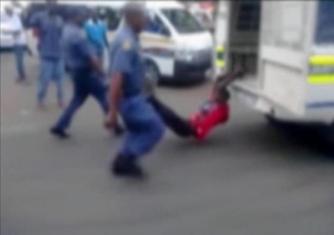 Police Brutality February 2013
In this still frame from TV, a South African man with his hands tethered to the back of a police vehicle is dragged behind as police hold his legs up and the vehicle apparently drives off.

The footage was posted on the internet by the Daily Sun, a South African newspaper, on Feb. 27, 2013.
Old woman beaten up by security guards - VIDEO

Apr 17, 2013 | Reader's Comment | 206 comments I watched it over and over again but still I fail to understand the necessity of such animal behavior especially towards a defenseless old woman. Regardless of whether the woman stole or not, this is inhumane.

It is like spitting back at the people who fought for what South Africa is today, one of their core philosophy was ubuntu but where is ubuntu in this? What has our country come to? Where did we go wrong?

First it was police brutality now it's security brutality. They think just because they possess a smoronshisi and earn peanuts they are God.

And the woman behind the camera is even amused by this brutality towards a fellow woman. Ironic isn't it?

The people involved and the store itself need to be made an example of that we will not sit back and watch them decay this countries values or tolerate this kind of behavior especially towards women regardless of what she did, this kind of violence is wrong fullstop. There were multiple ways they could've handled this buy they chose to jump to the far extreme. They deserve to rot in jail.

Acknowledgement to the Daily Sun and the Sowetan and for full story.